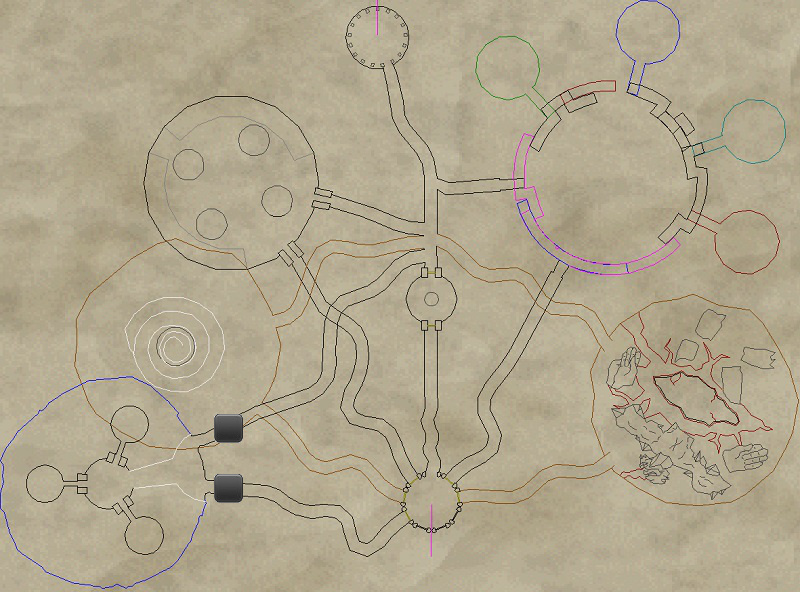 Some of the riddles depend on knowing what element a room is.  North room is Fire, west room is Water, and south room is Earth.

with no fear of appearing weak nor need to appear strong, brings with it a modest weapon.' - [middle of its room w/ rapier]

That is partially incorrect.
The Mob can be anywhere in room, Not reserved to Middle.
Ive just run it and he was in the front of room with Rapier.

They do not invis, so get everyone into the room before engage and blind wont be a problem (assuming you picked the right mob).

Trial of Three riddles:
' least size, for it may be the largest in power.' - [smallest of the three]
' whose great personal power is made physical.' - [weapon matches mob]
' with no fear of appearing weak nor need to appear strong, brings with it a modest weapon.' - [middle of its room w/ rapier]
' implies great strength by displaying little.' - [smallest weapon]
' of middling size that hides great strength.' - [medium size]
' wielding the great power of its element.' - [weapon matches mob]
' greatest in size.' - [largest of the three]
' furthest from battle.' - [back of its room]
' neither foremost nor furthest.' - [middle of its room]
' neither largest nor tiniest.' - [medium size]
' that brings with it the greatest of arms.' - [whiteish/green weapon]
' that believes in moderation in war.' - [middle of its room w/ rapier]
' that stands mid-most.' - [middle of its room]
' that stands foremost, least afraid to fight.' - [closest to the door]
' that stands to the rear, least ready for battle.' - [back of its room]
' that is the greatest of the three.' - [biggest of the three]
' that is perhaps weakest in strength compensated for with a sizable weapon.' - [biggest weapon]
' that is boldest, most ready for battle.' - [closest to the door]
' that is in its element.' - [mob matches room]
' that is not distracted by unfamiliar surroundings.' - [mob matches room]
' of smallest stature, as it hides the greatest power.' - [smallest of the three]
' that shows great elemental power by wielding the least of weapons.' - [the one with the dagger]

Please please please when you do this quest stay there and do not move from the hailed mob that you said prepared to as SHE (or he) is the one that will give you said clues. After that invis in and use those clues to kill the FIRST mob given, and then the SECOND mob that is not the LAST mob given, then eventually the LAST mob.

Note: if you do not ALL go into the room at the same time you will be kicked out / blinded and dotted up to heck and beyond. Not good. So be sure to have solid communication when doing this.

We got greaves and boots, the neck that looks like the mysterious belt of daggers, the aug, and a 106 spell from the chest.

You can get the reset message after you successfully kill the mobs in the right order. It ports you back to the entrance, but the chest remains - just go open it to update the task.

These have been added (minus arms since not in db yet), thanks!

The 3 NPCs and their effects

Dark Waters Sing
-Emotes "Dark Waters Sing begins to drip": Means an AE is about to occur, could be the Boiling Mana one
-Casts
--Water Blast: Single target DD and knockback
--Boiling Mana: PB AE DD based on your mana

Make sure you invis in to the rooms with each mephite. the blind is annoying, they can also leash, so be careful you dont push them to the edge of the room.  You can reset it if you are unable to figure out the clues by waiting until they get bored, it's a pretty fast reset.