Trial of the Wending Ways 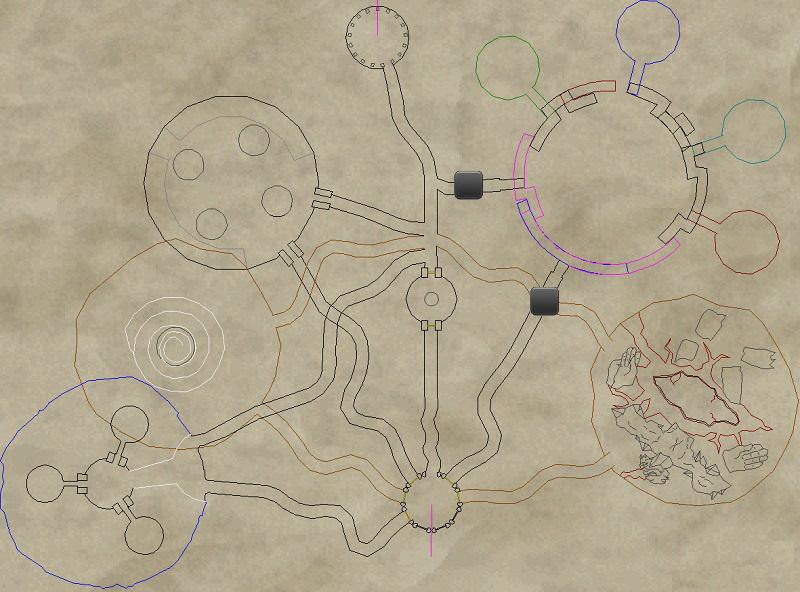 I've done this a number of times and feel i have a pretty decent strat for this now, want to share.
-Kill Order- this ones pretty easy, when you walk in after speaking to Waves of Saffron Sky (be invis) you can look around the room and see the portals, earth is kind of a green brown color, air is white, fire is fire(obviously), and water is blue. Count them, whichever one has seven portals is the mob you need to kill. Recount the portals after killing each mob.
-How to get there- this took me a few runs to get down. As you stand at the entrance, that first platform has access to 3 different portals, one directly in front of you (slightly to the left), one off to the left, and one off to the right.
--Air (Blustering) Go all the way left to that portal (not the one at the entrance), that one will get you to air after 2 jumps, maybe 3.
--Earth (Obsidian) Go all the way to the right portal, that one takes you directly to earth, one jump.
--Fire (Blazing) this is the portal directly in the center, the one right in front of you when you enter (slightly to the left), this one takes you to fire after 2 jumps.
--Water (Flowing) this is the same portal as fire, it is about 2 or 3 jumps after fire, if you have him before fire its no big deal there is some room to jump again without entering fires room.
After killing each mob the portals will all eventually take you back to the entrance platform with the 3 jump portals no mistake is possible as they all only have one option. the only landing with more than one option is the entrance platform.
Air and Water are basically tank and spank, keep your tank and healer alive and your dps can whittle them down, Earth splits at 50%, every time ive done it "SHARD" could be mezzed. Fire is the tough one. i go in invis, place myself behind one of the fire pits and tag him, he runs directly on to it. it takes about 5 seconds before he will take damage (this is true for all three platforms/fire pits). At 57% he will lock and you have to move him to another pit. At 24% he locks again, move him to the last fire pit and finish him off.

My loot tonight from Wending Ways was

My loot tonight from Wending Ways was

I'd feel a lot better about beating it if I could point to some strategy or trick I used that worked reliably. But nope, my advice to anyone trying it is to just keep trying because it's just a probabilistic failure mechanic you need to keep rolling the dice against. I know someone who took 49 attempts to get it.

It's a great example of what happens when developers reach beyond their grasp and implement an objective for the player that requires a buggy system to not bug out in the 100 or so hops you need to do each run.

Even if you kill them in right order, its PURE Luck, if you get the achs, as the landing is bugged often. Everytime you land and get ported to entrance of the trial even, you can drop and start new if you need the Don´t Trip Achievement only.

For Just Passing Through you have to hit the flying nilborian while jumping. Maybe luck ach too, or does anyone know a trick?

The named don't hit too hard but take forever to kill, especially the Fire one. From chest I got Happy Stone (aug type 7), Ornamental Dagger (range item) and Weeping Undefeated Heaven arms

The most portal types you see around the area, determines which ambassador to fight next. You can also invis past the trash mobs

This is correct, it is not based on the first portal you see when you request. It is based on the most portal types of that element. This pattern continues throughout the trial.

The named don't hit too hard but take forever to kill, especially the Fire one. From chest I got Happy Stone (aug type 7), Ornamental Dagger (range item) and Weeping Undefeated Heaven arms

I am not sure the information about the target selection is correct.

The top information states, "The portal you first see at start in the West entrance, determines which ambassador to fight next."

On earth neither mob is charmable.

On fire, the 25% is not accurate. We had our lock at 56%. I believe the % is either random or timed based or something else.

Do not plan on slowing air by ENC or slow belt even with resist modifiers, not sure about SHM. The first time through we had a top raid paladin and a top group cleric and it went fine. The second time through we had a raid tank and a group cleric and wiped. The second group after wipe the necro left so we did the event with a merc cleric (the real cleric stayed) and won. Plan on either a strong tank/healer or go with 2 healers and accept the slower DPS.

Falling into the middle will port you to a safe spot, but costs you an achievement.

Nothing sees invis, so invis after hail and stay invis until engage. Named can aggro to portal so try to rebuff/rez at hail.

Have to use the jump pads to get around to the various rooms.

Stone (Obsidian Undefeated Shield)
-Splits into 2 adds at 50%
--Obsidian Fragment
--Obsidian Shard: Mezzable
--Kill both adds and fight is over

I don't think I fully understand the mechanics of this, but we killed Water -> Wind -> Fire -> Earth (I think). Bosses have a ton of hit points. You get a bunch of items at the end.

It's unique every time you do it the order. If you can see particles the first portal pad you see has a specific element type attached that determines which you need to kill first.

You can also trial and error it just running into them until one doesn't bounce you, BUT I think there is an achievement to get bounced 0 times

I don't think I fully understand the mechanics of this, but we killed Water -> Wind -> Fire -> Earth (I think). Bosses have a ton of hit points. You get a bunch of items at the end.