Esianti: Palace of the Winds 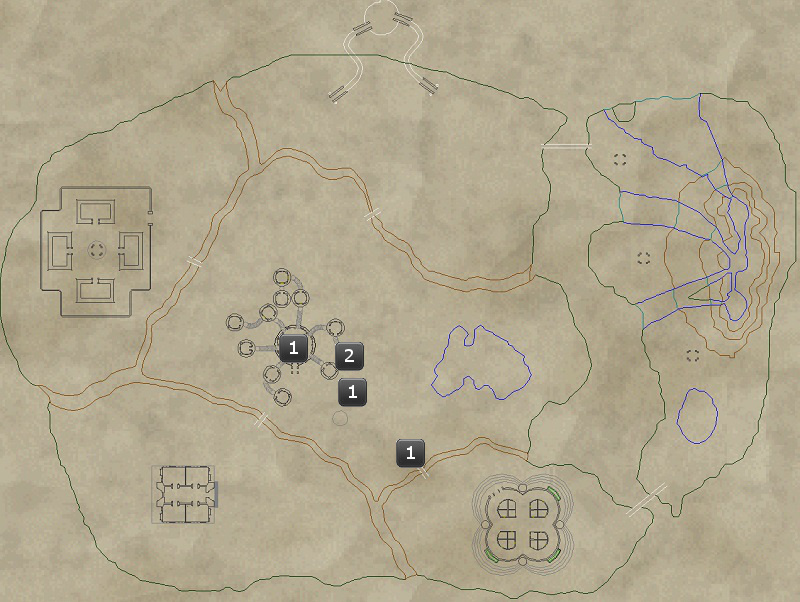 At this point, easy to 2-box if you want to farm augs/lamps.

All 3 named can pop in a random order it seems - so every time you run it, you might fight in a different order each run. They are all tethered to their spawn point and can't be pulled too far from it. As a result:

First named you can tag the 2 Brumes and the named will just path back. Easy split.

Second named - just watch out for 1-2 roamers and clear before pull. Just charge it and fight/

Third one is a bit more to do. First clear 2 Brumes at front of the room - no adds will come (you could probably leave these, but I've always just cleared). Next, invis up to the ramps by the king hail, and clear the 4-5 mobs up there) - this helps after named is dead. You can single pull the add that roams/circles the named from here too. Engage named and fight at spawn. Even if you camp a toon at the door and open it as the named dies, 2 mehpites will always spawn. Just kill them fast (if you want /ach for just 2 spawning) and hail to stop their spawn timer.

writ does not have to be on cursor, you just have to click on door (near the bottom is what I did).  I believe armor have to be cleared from door before you can click on it.  Also, once clicked, the mephit stop spawning which is a big deal if going for ach.

Some stuff to add about the named mobs. The 3 named mobs you have to kill appear in a random order.

Sunshine Sensible Warmth - Casts Crippling Knives - DoT with a mana drain and snare.
Radiant Fog Evening - Casts Suffocating Breeze that is a DoT and very large DD if not cured. Curse cures it.
Feather Silver Sheen - Casts Gouging Strike and spits out an add every 20-30 seconds. Adds are mezable

Note: Mobs have very high resist, malo/tash are great, i had to use bard resist debuff to guarantee mez.

Invis to the Named mob i believe east of the middle area.  across a small bridge.  Careful this is a red mob and active and sees invis stuff.  You can invis around everything until you are setup and ready.

1. Kill red con named.  CC guards behind her (Mez/root) these can be blurred if you wish.

2. Kill red con named toward middle area (you may need to clear static mobs that will agro, one raomer as well.  KILL GALE MOBS FIRST!  they hurt.

3.  Kill Name in center.  and the mephit spawn begins.  these mephits will continue to spawn from the guy up on the stairs Red con named Moon.

4. You can invis up to the "King" and hail him and say the phrase "do you know who will protect you"

5. The final hail/phrase has to be finished while the emphit mobs that continue to spawn on a timer are dead.  they are easy to kill before the next one spawns.  They will also go towards a group member no matter where you are. so dont run all over unless you are doing the final hail.
5a. do not go inside the door the "King" is in you can only open it from the outside.

this is currently bugged.  you must all drop the expedition but stay in the task. once you are all completely out of the expedition you can do the event.  Each player must log out to player select and back in after leaving expedition or the window will say you are still in it.
This stops the mobs from despawning 10 sec after you start